Doctor Helicopters
Flying to save as many lives as possible

What is a Doctor Helicopter?

Getting to Emergencies Quickly

A Doctor Helicopter is a helicopter that can quickly bring a doctor to an emergency. The helicopters stand by at base hospitals ready to respond to dispatch requests and are equipped with the medical equipment and medicines needed for initial treatment. After arriving at the scene, the injured or ill person is promptly treated by the Flight Doctor then transported to the appropriate medical institution. Being able to start treatment at the scene is very different from an ambulance, whose purpose is to transport the patient to a medical institution. By the way, “Doctor Helicopter” is an English name made up in Japan. It is otherwise called an Air Ambulance or Helicopter Emergency Medical Service (HEMS).

What Does a Doctor Helicopter Do? 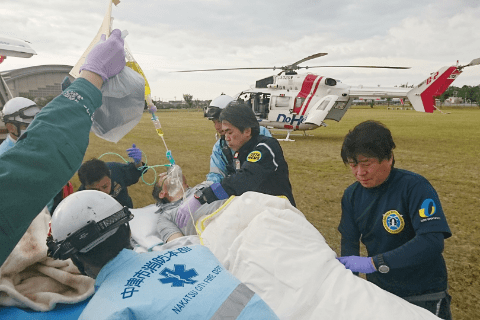 
* Rendezvous Points: The locations (points) where an ambulance and a Doctor Helicopter can meet up. They are locations for landing and take off at the emergency scene and are selected in advance by the Flight Coordination Committee in each prefecture. The committee has selected locations such as schoolyards, parking lots and parks. HEM-Net survey has found there are 625 Rendezvous Points per base hospital, as of the end of March 2017. 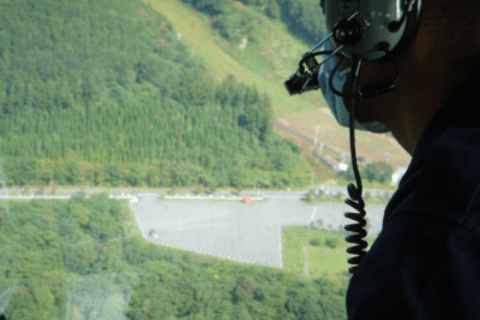 Eliminating Regional Health Care Disparities
Since Doctor Helicopters are helicopters for emergency medical services, urgency is an important criterion for dispatches. In regional areas, however, medical institutions are being consolidated, which means they are disappearing from local communities. For the residents of these medically under-served areas, there is the need for a means of getting to a distant medical institution, even if the urgency is low. The reality is that Doctor Helicopters are also used for this sort of local medical care. In addition, the operation like a “Doctor Delivery Helicopter” in which doctors are dispatched to remote areas such as mountains and remote islands is also an issue to be considered. 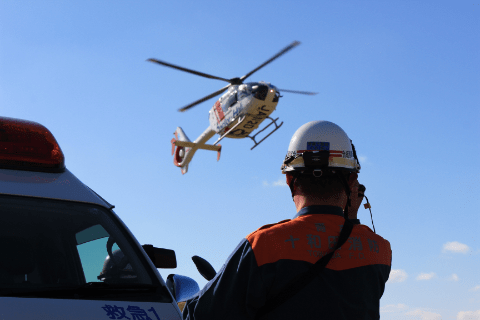 Operating During Major Disasters
One of the important missions of the Doctor Helicopter service is to operate during major disasters. Major disasters mean large numbers of injured people who need to be transported in a short time to locations spread out over a wide area outside the disaster zone. There are already 53 Doctor Helicopters across Japan and they are required to operate in coordination with Self-Defense Force helicopters, Police helicopters, Fire and Disaster Management helicopters, and Maritime Safety helicopters. Standardized rules are needed to practice this sort of coordination with precision, during dispatches and also during operations in disaster-stricken areas. The Japanese government sets out the requisites in the Basic Disaster Management Plan, while the Ministry of Health, Labour and Welfare has formulated the Guidelines for Establishment of Doctor Helicopter Operational Systems in Large-scale Disasters. In addition, to enable Doctor Helicopters to take off and land freely during a disaster, Article 176 of the Ordinance for Enforcement of the Civil Aeronautics Act provides a special provision that removes the regulations of the Civil Aeronautics Act.